Greystone GT became race winners for the first time as Rich Mason and Jon Lancaster scored an extraordinary GT Cup victory on a chaotic weekend at Silverstone. It was an inspired strategy call that put the #22 McLaren 570S GT4 into prime position in the GTH category – the most hotly-contested class in GT Cup – in Saturday afternoon’s Endurance Race. An on-track incident brought out the safety car close to half-distance, and it was still on-track when the mandatory pit window – in which all cars must spend at least 70 seconds stationary and driver changes are allowed – opened on the 29-minute mark.

While most of the field had passed the pit entry for the 11th time when the window opened, several cars running lower down – such as Rich’s McLaren – were able to come in, swap drivers and rejoin the action while their rivals ran at slow speed. When green-flag racing resumed next time around and the majority of the field pitted, it was Leeds racer Jon – now having relieved Harrogate-based Rich – who led. The former European Le Mans Series champion clung on to that advantage too, winning by just 0.032 seconds for a memorable first success for Greystone GT. It was a magnificent result for Rich, who was competing in only his third racing event, and for Silverstone-based Greystone GT, whose race team was established less than a year ago and has taken on the challenge of GTH with three rookie competitors.

Iain Campbell and Duncan Tappy were fourth with Mark Hopton and Adam Carroll scoring their best result of 2021 in with a fine performance in fifth. Rich was sixth in Sunday’s sprint race while a 20-second success penalty – applied due to the #22 car’s class win 24 hours earlier – restricted he and Jon to ninth in the finale. Both Iain and Mark were involved in major incidents in Sunday morning’s sprint; the former after scoring a career-best fifth place in qualifying.

Iain’s McLaren became a launching ramp for a rival and suffered heavy right-side damage – the Sandhurst racer fortunately unhurt – while contact a few laps later also put Mark, from Repton, out. Incredible work from the Greystone GT mechanics – for which they were later named ‘Team of the Weekend’ got both cars back on-track, and while Iain and Duncan used it to climb to fifth by the chequered flag, Mark and Adam retired with a clutch issue. The event had begun with with Iain scoring his best solo finish to date in fifth in the opening sprint with Mark and Rich 11th and 13th. Iain and regular co-driver Oli Webb moved up a place to seventh in the standings with Rich/Jon 11th and Mark/Adam 12th. 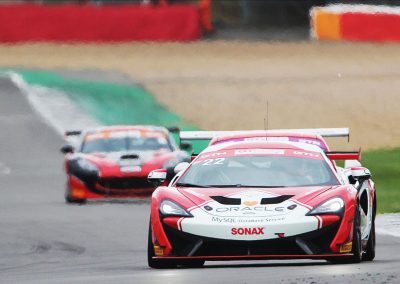 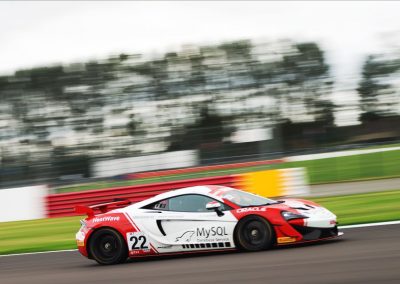 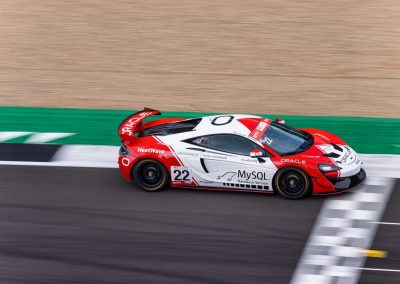 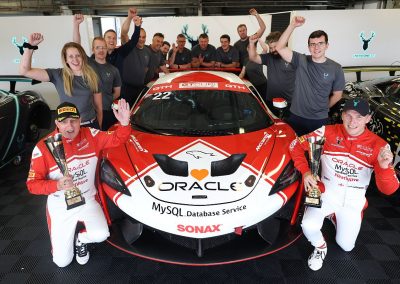 Rich Mason said: “It’s absolutely fantastic to get the first win for myself, for Jon and for Greystone GT – and in only my third-ever race weekend. It wasn’t expected and we certainly had a bit of luck that our track position gave us the chance to do the driver change before most of the other cars, but it was a genius move by Katie [Lawrence – Race Engineer] and the team in the pits to call us in at the last minute. That won us the race because Jon’s such an experienced and fast driver that when you put him in the lead, he’s not likely to give it up. The set-up at Greystone GT is first-class and we couldn’t have done it without them.”

Jon Lancaster said: “It’s one of the strangest wins I’ve ever had, but naturally we’re all over the moon. For Rich to get this win in only his third-ever race weekend is pretty special and shows not only the progress he’s made behind the wheel, but also the fantastic job Greystone GT have done to get us into this position. We’re not kidding ourselves by thinking we’re the fastest, but we were where we needed to be when it mattered and the team made a perfect call to pit us just as the window opened. I’m going home very pleased.”

Mark McLoughlin, Team Principal, said: “To get the first win under feels fantastic. The circumstances were maybe a little fortunate, but Rich and Jon’s crew made an excellent call to pit them at the earliest possible opportunity and reaped the rewards. Rich, Mark and Iain have all taken a big step forward again this weekend, which is exactly what we’d hoped for. Everybody’s worked so hard, and after the tireless work by the mechanics to fix both Iain and Mark’s cars after Race Three, being named Team of the Weekend is a justified reward for them.”