Greystone GT scored a pair of top-five finishes as the new team made its race debut in a record-breaking GT Cup season-opener at Donington Park last weekend. The racing division of the Silverstone-based organisation was only formed last October and had pulled out all the stops to enter three immaculately-presented McLaren 570S GT4s as part of a 38-car grid – the biggest in GT Cup history – at the East Midlands track. Rookies Iain Campbell, Mark Hopton and Rich Mason were paired with international racing champions Oli Webb, Adam Carroll and Jon Lancaster, whose speed and experience has proved invaluable in preparing them for their first taste of racing. The result was that Jon and Oli – both European Le Mans Series Champions – were able to partner Rich and Iain to fourth and fifth-placed finishes in the fourth and final race of the weekend with Mark and Adam seventh.

That final race – a 50-minute enduro in which Sporting drivers like Iain, Mark and Rich are allowed to share with experienced professionals – had featured a three-way fight for fourth between Oli, Adam and Jon, which turned on its head late on. First, former IndyCar racer Adam was given a stop-go penalty for being one second under the minimum 75-second minimum time when he took over the #77 McLaren from Mark, falling from fifth to seventh. Then, after finishing fourth on the road, the #23 machine of Iain and Oli was penalised five-seconds post-race for overtaking behind the safety car, dropping the duo to fifth and promoting Rich and Jon in their place. Iain, from Sandurst, had finished eighth in each day’s Sprint Race – which the pro racers are barred from competing in by series regulations – and combined with Knutsford racer Oli to finish sixth in Saturday’s Pitstop Race. Rich, from Harrogate, had taken 11th in each of the Sprints, but a late charge from Leeds racer Jon brought them back to ninth by the chequered flag in Saturday’s Pitstop Race. Repton racer Mark made excellent progress across the two-day meeting. He was not classified as a finisher in the opening Sprint Race after a late incident, but with the experience gained he claimed his first series point with 10th on Sunday.

Teaming up with Adam in the Pitstop races, the pair were 11th on Saturday before improving to seventh 24 hours later. They are 12th in the GTH Championship points with Rich and Jon in 11th and Iain and Oli ninth.

Rich Mason (#22 McLaren 570S GT4) said: “We had some highs and lows and I made a couple of schoolboy errors on Saturday, but I learnt a lot and I managed to get quicker every time I got in the car. It was just an amazing experience and the team did a fantastic job of helping us to get up to speed. It was great to see the progress on Sunday, when I qualified half a second quicker than I’d been the previous day, and that really helped us to set things up for us to finish fourth in the Sunday Pitstop Race. I definitely plan to be back later in the year because I’ve really bitten the bug now.”

Jon Lancaster (#22 McLaren 570S GT4) said: “I’m quite surprised we got the fourth place at the end, especially as Rich and I had only done two days together before the build-up to the Donington races. The Greystone GT team is very professional and incredibly well-run and that kind of environment helps everyone to work together better. It’s certainly been good for Rich because he’s massively under-practiced compared to many of the other drivers and his positivity and willingness to solve problems has just been amazing.” 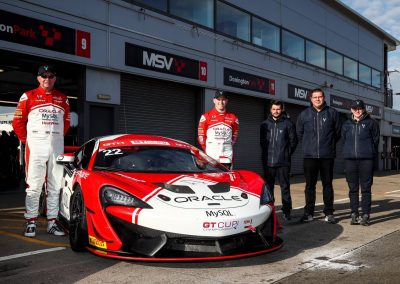 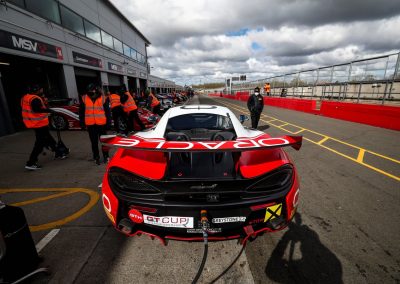 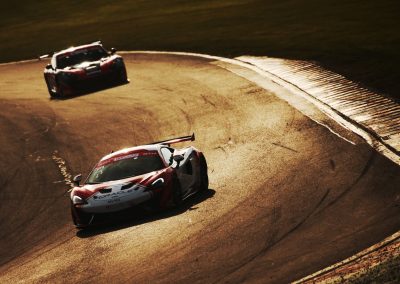 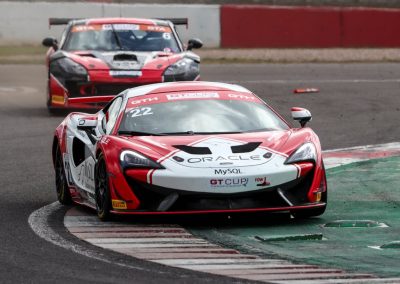 Iain Campbell (#23 McLaren 570S GT4): “It was a real baptism of fire with the biggest grid in GT Cup history and on the shortest track on the calendar, but a hugely enjoyable time. The professionalism of the team and the patience Oli’s shown has been brilliant and it’s really helped me to settle into the car faster. I was pretty happy with my driving on Saturday, but then we just kept on improving things over the weekend – by the races I was lapping quicker than I’d been in qualifying. I think that’s the key area I want to work on now to get as high up the grid as possible and give ourselves a chance for better results.”

Oli Webb (#23 McLaren 570S GT4): “We’ve had some really promising results this weekend and Iain should be very proud of that. He’s a rookie that’s lapped Donington half a second faster than he’s ever gone in testing in the McLaren and only two or three tenths slower than the reigning GT Cup champions, so that’s a really good effort. Don’t forget that this weekend was his first rolling start, his first safety-car period etc. We know what we have to work on between now and Brands Hatch to help Iain extract a bit more from himself and the car and I’m sure we can get there quickly.”

Mark Hopton (#77 McLaren 570S GT4): “What a fantastic experience; I’m still buzzing! Sure we had plenty of highs and lows, but I loved every minute and the last race – by which time I felt I was getting the hang of things – was great. Having 38 cars on the grid, all from different classes and with different levels of speed, meant you were either lapping or being lapped all the time and that took quite some time to get used to. But the team and Adam worked really hard to prepare me and now I know a lot more of what I should expect at Brands Hatch next month.”

Adam Carroll (#77 McLaren 570S GT4): “It’s been such a positive start for everybody involved with Greystone GT over the weekend. We’ve had highs and lows, but we’ve definitely finished on a high and that seventh place could easily have been fourth were it not for a penalty that really isn’t anybody’s fault. Mark was excited about this weekend but now he knows for sure how different racing is compared to his experience. He did a really good job, learnt very quickly and I know we can move forwards at Brands Hatch.”

Mark McLoughlin, Team Principal: “I can’t even begin to say how proud I am of the whole team. We knew this weekend would be a huge challenge; our first race event as part of the GT Cup’s biggest-ever grid. Plus we entered the biggest class with the highest number of pro drivers, but we’ve come out if it having had a fantastic experience. Everyone dug deep, be it drivers, technicians or operations staff and I really can’t wait for Brands Hatch. We know we have some things to improve on, but I’d call it a very positive experience.”